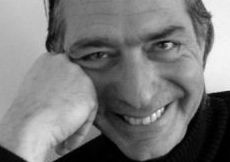 
Frederic Amat, painter, sculpturer, scenographer, designer and film director, is a polyfacetic and prestigious creator. He studied set design and architecture in his hometown Barcelona. 1976 he made his first one man shows in Barcelona and in Paris.

The dedication of Frederic Amat to his painting has not prevented him from exploring other horizons, moving through life, geography and diverse forms of artistic expression with insatiable curiosity. From 1978 he expanded his interest towards other artistic forms such as happenings and performances in different countries in Europe and America establishing his career as a painter. He started collaborating with Gelabert in 1973.

Film language and painting are joined together to pursue new aesthetic styles which are different from the usual commercial movies. His short films include: 'Foc al Cantir'', 'Deu Dits', 'Backwaters' and 'Danse Noire'. He has also directed 'Journey to the Moon' (1998) based on the only film script of Garcia Lorca with the co-direction of Cesc Gelabert.
Are you Frederic Amat?