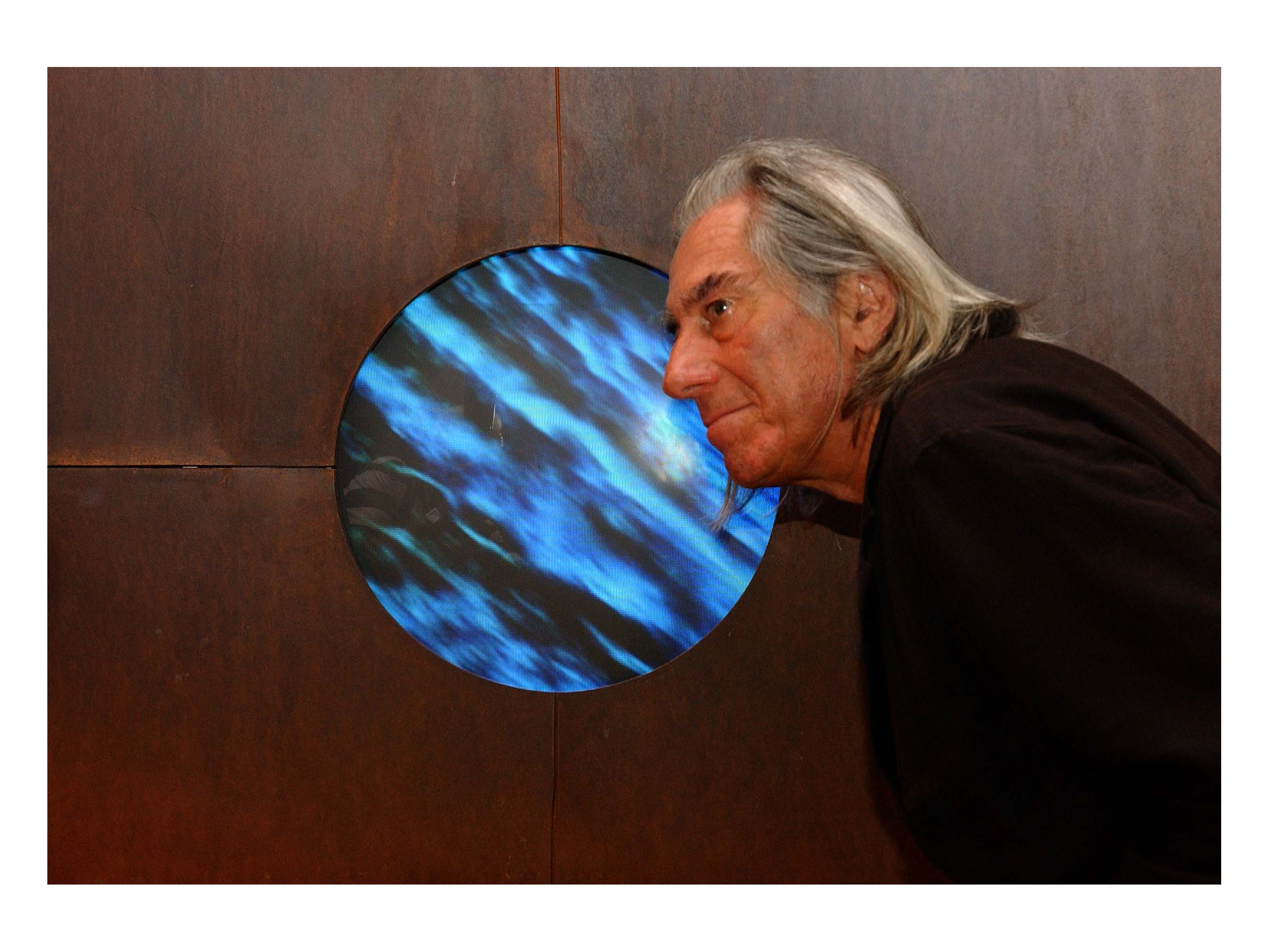 
Fabrizio Plessi, one of the most important European video-artists, combines his fascination for the materiality, which comes from the tradition of the Arte povera, with the interest for the video, the experimental means and the facilities of specific location. All his monumental and baroque installations include natural forces, as the water and the fire, which is juxtaposed to elements of the world of the construction in an attempt of making ourselves think about our own ideas concerning the history, the recollection and the landscapes, already be natural or constructed.

Fabrizio Plessi (Reggio Emilia, Italy, 1940) was formed in the Artistic Lyceum and in the Accademia delle Belle Arti of Venice and later he will be teacher of painting. Already in this early epoch, from 1968, the water is the central topic of his work, appearing again and again in his installations, movies, videos and representations. In his work, this one takes two directions, so much the conceptualization of aquatic images as different direct actions with the water as protagonist. His work is characterized for combining the fascination for the materiality proceeding from the Italian tradition of Arte povera, with the video, the experimental means and the installation in specific location.

Thus, in his work there is reflected the ambiguity of the visual image, the deceitful perception of the reality by the senses and the relation of the man by his environment. It makes ponder on the origin of everything. Also importance receives the "time", the memory and the recollections inside a constant dialectics of opposite concepts: essence - appearance, interior - exterior, object - concept, natural - artificial, conscious - unconscious, reality - representation, unit - plurality, reason - intuition, etc.

The water has been a constant element in his work during more than 30 years, metaphor of the creation, of the reflection, of to flow and the transformation. It is never used as physical reality, but as image of video, the monitor of video is the object protagonist, metaphor of the modern society and of his form of more common communication, fulfilling the functions of window to other realities. He inherits from the Arte povera the conceptual approach of the work, the use of materials without manipulating promoting the energetic power and transformer of the same ones, including the sound capable of transforming spaces.

He exhibited in the experimental pavilion of the Biennale di Venezia in 1970 and in the following one. In the period he realizes a series of exhibitions in different places like the Palazzo dei Diamanti in Ferrara (1975), the Städtische Galerie im Lenbachhaus in Munich (1978), the Internationaal Cultureel Centrum of Antwerp (1980) and the Palais des Beaux-Arts of Brussels (1975, 1983). There took part in the Festival of Cinema of Venice with his movie Liquid Movie and wons the prize Città di Milano in 1980 and on the following year, he shows in the Venice Film Festival Underwater, a French production. It is the first time that electronic mediums are included in a film festival.

In 1982 at the Centre Georges Pompidou in Paris he exhibited his videos. In this epoch he starts examining thoroughly the spatial conditions and the options that these offer the videoart, incorporating three dimensions in his work. The illusory relation between the reality of the liquid element and his representation becomes strong, furthermore, thanks to the technological possibilities in continuous expansion of the electronic and mechanical playback.

In the last decade he has developed the monumental slope of his work with creations of video installations like "Lliquid Time", produced by Philips for the Trade fair of Berlin, acquired by the Zentrum für Kunst und Medientechnologie of Karlsruhe, or the work that the Italian Government entrusted him for the EXPO 2000 of Hannover, "Mare verticale" (vertical Sea) a structure of steel of 44 meters of height with a led-screen that simulates electronically the movement of the sea; also the electronic giant waterfall that constitutes a spectrum of color with 16 million variations, monumental work that the Sony Center inaugurated in the year 2000 in the Potsdamer Platz of Berlin.

Are you Fabrizio Plessi?