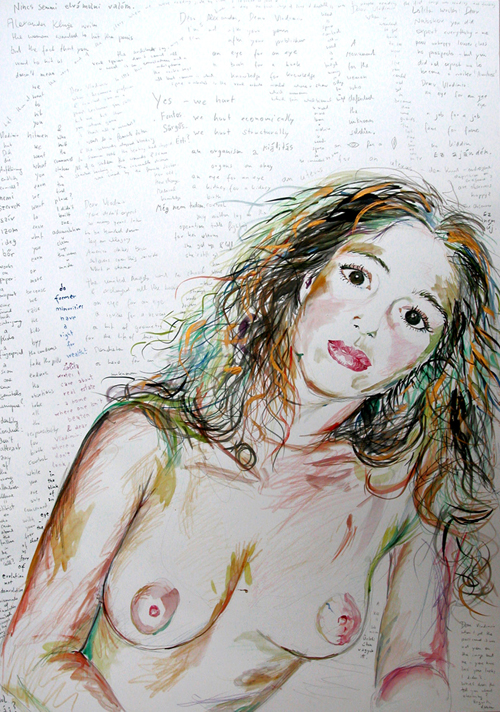 
Elke Krystufek was born in 1970, in Vienna. She studied at the Fine Arts Academy of Vienna in the early 1990s. She grow up with the tempestuous work of the Vienna Actionists-Who have explicitly explored sexuality in art. In 1993, just after entering the fine arts academy of Vienna, Elke Krystufek began a violent work involving the deconstruction of archetypes and artistic formalism. Through a considerable and protean work (video, drawing, photography, performance art), she creates depictions of herself in innumerable versions. The self-portraits serve as a projection surface for issues such as standards and norms imposed by the family or society, as well as her own views, and those of others, about identity. The artist explores phenomena such as power, availability, communication, body designs and borderline experiences. Her work deals with social discrimination, sex and violence, but beauty, leisure time and pop culture are also part of her conceptual set-up. Using herself as an object of art, the artist deliberately confronts the terror of symbols and cultural laws. She draws on her own body as a topic and material for her work. Often shocking, the nudity presented in her pictures is not designed to provoke on the surface but rather questions the levels of significance accorded to nudity by our society. Elke Krystufek is now teaching at Akademie für Bildende Künste, Vienna, where she also lives and works.
Are you Elke Krystufek?