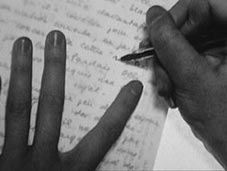 
Elina Saloranta is a Finnish artist who has worked with several media. Most recently, she has turned to film and video, which she studied on a Fulbright-scholarship at the School of the Art Institute of Chicago from 1999 until May 2002. Currently she is living in Helsinki, Finland. Before film and video, her work often took the form of photography and text. "The Nun's Story," a project that started with a kitchen towel and ended in Africa, was published in the French contemporary art magazine Artpress last April (hors série: Fictions d'artistes). The video "Puhdas" will be shown in the Finnish Museum of Photography in Helsinki in January 2003.
Are you Elina Saloranta?